When school is the best thing...

I started working at a new school in August. I now work at a smaller senior high school with focus on IT, computer science and technical subject. I teach entrepreneurship and English. It is a whole new world I am entering a world full of computer nerds. I love it - they have a special passion for technology which I will never understand but a interest I fully respect.  I have already learned new IT terminology, about fiber installations, programming and gaming. Learned that computer nerds really drinks a lot of energy drinks, talks about LAN and how they build their own computers.

This school is a school where many of the students finally finds school a great place to be and not a harsh environment without understanding. A school where they can learn more about their biggest interest of IT and computers, where the classmates shares the same interest and passion and are friendly to each other. It is great to see and to hear how these young people finally want to go to school and have made friends. It makes me happy, warm and proud. A mother told me last week that finally her soon wants to go to school and when he comes home tells her what he has done during the day, she said that has never happened before.

I made below illustration based on a conversation I had with two of my mentor kids a couple of weeks ago. My English 5 students was working in smaller groups and I was circulating helping and asking how they were doing. These two guys are pretty shy and as I want them to use their English I asked them how they find their new school and if they feel they've settled in alright. The first guy looked at me and said that he really like the school and all the computer science subjects that much that he had recommended the school to people he knows. Great I said and looked at the other guy who is a very quiet guy "what about you ?" He was looking down and I was thinking maybe he doesn't like school but then he looked up just a little bit and said " starting at this school is the best thing that has happened to me in a very very long time!" 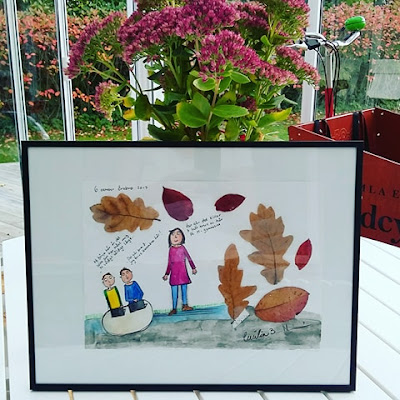 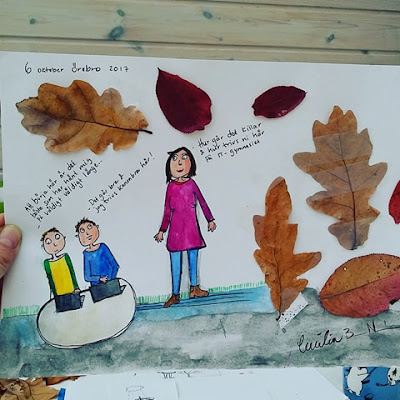 Email ThisBlogThis!Share to TwitterShare to FacebookShare to Pinterest
Etiketter: illustration

It is pity that I have not taken time to write here on the blog. I love having a place where I can write and have my illustrations collected and where I feel that I want update things. Collect memories and thoughts from this moment of life. Also to really force myself to sit down and put pen to paper. Writing is something you have to keep practice to find that nice flow and feeling to catch the reader and make the reader understand you thought, feeling or instruction. This year I am working as a English and Entrepreneur teacher and I am very much inspired as I am giving my students a lot texts and different type of texts to write. At the same time it has been a rather hectic past few months and that's why I havn't got around to write. We have bought a townhouse and moved to Örebro beginning of August. Kids changing kindergarten and me changing job, has gone pretty well although always hard to change routines. Moving the horse and learning the new stable routines and trying to get the stable-life to fit with the new town life. Keeping Lundsätter as a our weekend and country-get-away-house and organizing things there so we just can enjoy when we go there. Big hassle that due to the dry year no water in the well and we have realized what a pain it is to be without water in the tap. 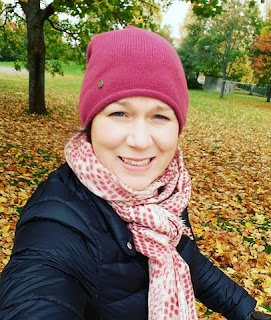