Last Monday( 25 of March) was the yearly Waffle day in Sweden - not sure if it is an international waffle day, from what I can read has a special waffle day spread to other countries but not necessarily on the same day as in Sweden. In Team Nikolovski household we eat waffles now and then all year around. Sometimes and lately pretty often for breakfast or after kindergarten snack with raspberry jam and whipped cream.

A few years ago when we lived in Prague - I got a question from an international cooking magazine based in Prague, chefparade.cz, if I could prepare a Swedish Easter breakfast. Hmmm Swedish Easter breakfast more then just painted eggs and Kalles kaviar and I thought that the traditional Swedish herring and potatoes felt too much for breakfast. After some thinking I came up with waffles with typical Easter topping such as smoked salmon, shrimps, egg, red onions and sour cream. No maybe it is not something every Swede makes for Easter breakfast but i thought it was a great idea and good combination of what we do typically eat for Easter with what is nice for breakfast and in an international context. The article was nicely written but it and I  got so many comments from Swedes who were objecting that this is not at all what we eat for breakfast around Easter. Hahaa such narrow minded people I was surprises with these reactions as I had no intention to break any Swedishness rules when I said yes to make this article. I just used my creativity in combination with my experiences from Swedish Easter and breakfast. Anyways here is the article and I think my waffles are perfect for Easter and the waffle day and all other days too. 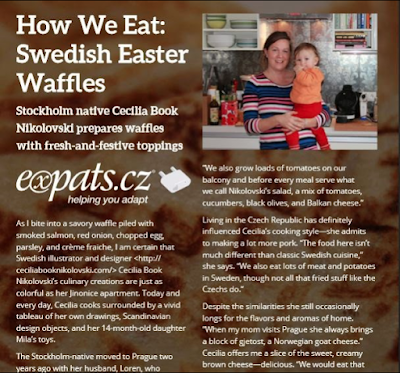 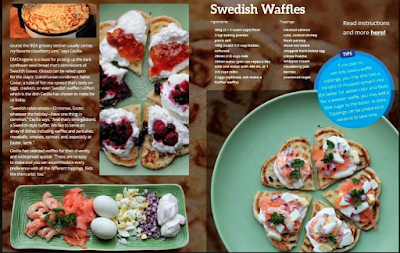 Today's German lesson started in our classroom on Berliner Allee where we were writing a short dialoge, practicing housing phrases ( Hier wohne ich) and listening and singing a nice song, Wir sind am Leben ( The life we are living). At 12 we grabbed a quick lunch from one of many bakeries here in Düsseldorf and walked through Hofgarten were we enjoyed the Magnolia trees blossoming. Continued to Kunstpalast where the permanent exhibition is free daytime on Thursdays.
Our teacher Nadia gave us tasks about some of the art works and the artists, which I will go through here, so this post is basically my homework. I will write in German and Swedish as the two languages have more similarities. I am very new to German so analysis and sentences are very simple and probably contain heaps of mistakes but I have decided to just do it.. 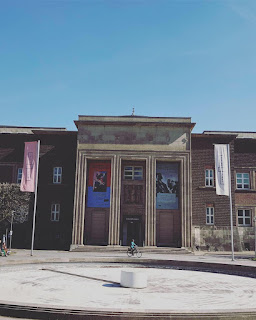 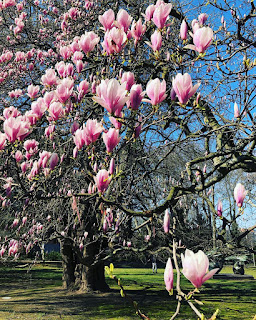 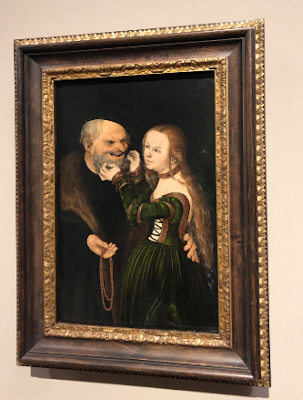 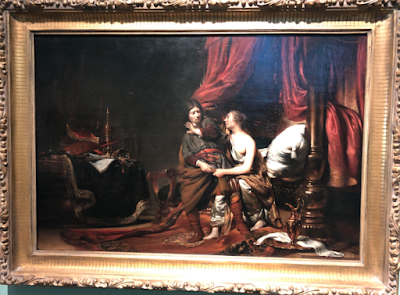 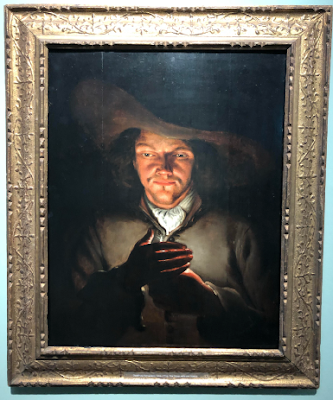 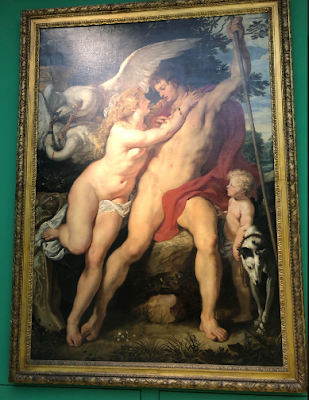 Mornings how you stress me 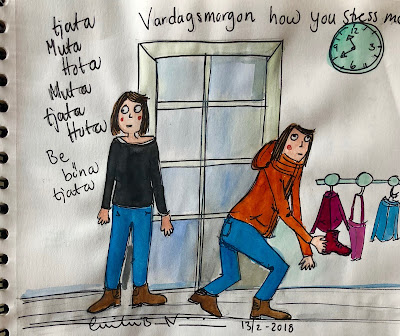 This is an illustration I made a year ago in Örebro. An illustration in my sketchbook on the theme how mornings with small children can stress the shit out of you. Not always but in periods. This year is different as I am not having to make it to a meeting at 8 o clock. But still stressful to get everyone through the door and so this illustration still very accurate. Last week F after being ill did not want to go to kindergarten at all and did everything not to get ready and get through the door. Nagging, begging, threatening and then begging and threatening some more. And then feeling guilty and double-checking so all is good in kindergarten. I guess all parents can relate - or not- maybe is just me ?!
Lets hope this week starting tomorrow will be more easy and forward going.
Upplagd av Cecilia Book Nikolovski kl. Sunday, March 17, 2019 No comments:


Did you know that here in Rheinland, Germany they have not only four seasons but five seasons
Autumn Winter Karneval Spring and Summer
Karneval is celebrated annually and people dress up, come together and celebrate.
It is very surprisingly how big karneval is here as I thought karneval was big in warm exotic countries not in this northern rational stiffer industrial country. Karneval is big especially in Köln and Düsseldorf.
I got asked already in the autumn if I had ever experienced Karneval and when I said no people was telling me all about it with a special fascination in their voice. Karneval goes on for many days or actually the people who are involved in karneval club and are choosen to be prinzpaar they dress up, party and have meetings about karneval from 11.11 when karneval season opens until Rosentag Montag which this year was on 4 of March.

But where does karneval comes from?
Karneval is dated back to the Middle Ages in Germany but might even go back to the Roman time. When it first began Karneval was a festival to honor Diysos, the God of wine, where locals from the Rheinland would get together drink wine, discuss and critizes the authorities without any penalties during the days of celebration.

My first Karneval experience in Düsseldorf
Started on Thursday 28 February
Kids got dressing up in the morning for Karneval party in their kita. Mila dressed up as Willy Wonka from Charlie and the Chocolate factory and she really looked like a mini copy of him. She is such cool and brave girl although she was very nervous to show up at kita in her costume. Filip was first going to be Father Christmas but as he is dressed as him every other day he decided to be a policeman a very cute policeman.
Kita was all decorated and prepared for party and fun activities. 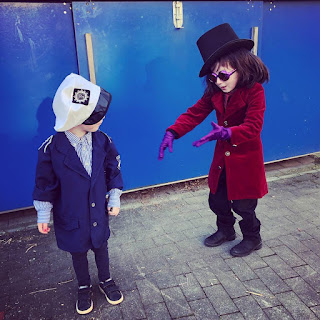 After leaving the kids I went home to get dressed in my mouse hat before heading with Ubahn in to town to meet up my German class and experience Karneval kick off in Altstadt. It was an experience only going with Ubahn as everyone was dressed up and party train early in the morning. 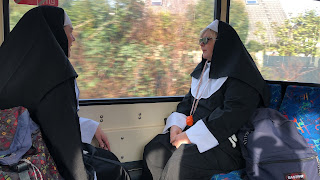 Our German teacher Nadia took us first to a bakery to try Berliner with champagne flavor, a sweet bun specially for Karneval. After that we headed to Alstadt and the Rathaus (Town Hall) where at 11.11 the women take over the power of the Town hall and its officially starting of karneval. Lots and lots of people out. Everybody dressed up. Techno music. Beer and cheering. In the smallest and very traditional bar in Düsseldorf Nadia ordered us Düsseldorf special drink Killepitsch kräuterlikeur. 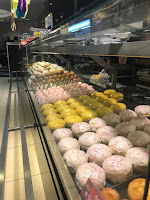 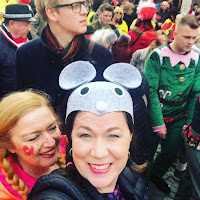 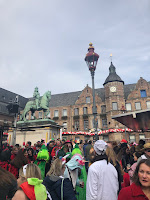 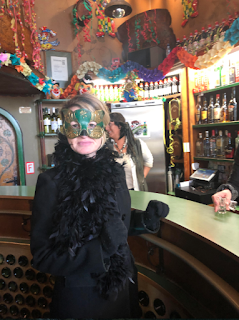 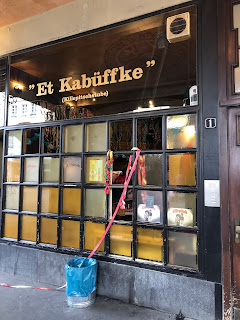 I headed back to Kita where parents were invited for karneval party - with singing, snacks and drinks. As a Swede I am always so surprise that it is normal here to serve parents wine in the kindergarten during activities like this.
A lot of Helau screaming in kita when Prinzpaaren came and celebrated karneval with the kids. HELAU  - Is what everybody greets here in Düsseldorf for Karneval and in Köln they say AFFLOU instead. 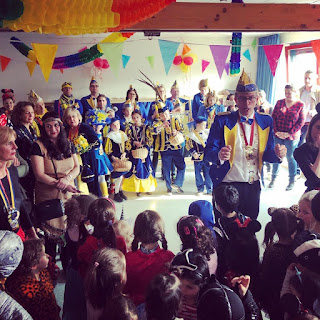 Karneval continued on Saturday with the kinder karneval parade on Köningsallé in the city. Big long parade with candy rain. Oh my good kids collected so much sweets. 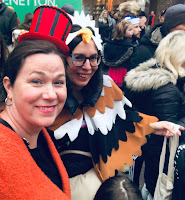 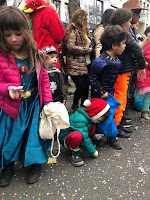 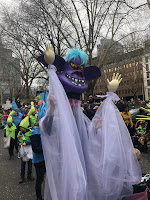 Ended with another but smaller karneval parade on the Rosen Montag in Wittlaer our neighbourhood. And by now I had filled my quota of celebration and dressing up. It was a great experience and when I have recovered from this years karneval I will look forward to next year.