I thought I try explain where in Düsseldorf we live. Düsseldorf is the second largest city in the  federal state North Rhein-Westphalia after Cologne ( Köln) And Sevenths largest city in Germany.  With around 600 000 inhabitants. The city lies mainly on the east side of river Rhine. (Rhine begins in the southeast Swiss Alps and flows through the German Rhineland and ends out in the North sea from Nederlands.) Düsseldorf is close to Duisburg, Dortmund, Essen, Wuppertal, Cologne and also Venlo in Nederlands.
The city is divided in to 10 districts and we live in district 5 which is up north close to the 8 on the map below. 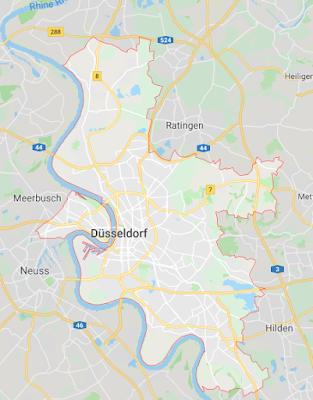 We live in Wittlaer a very cute and pretty fancy suburban area which is more like a village that have most things. It has shops, banks, pharmacy, a few restaurants, school, kinder-garten etc but also very much a feeling of that you are in the country-side. I often walk down to the river bank of Rhine and a lot of beautiful walking and biking paths in our area. I use my bike most of the time here, since we moved in August 2018 I have only filled fuel in my car two times.
Wittlaer kind of belongs to Kaiserswerth which is only 10-15 minutes with bike from us ( on the map below = where number 15 is) In Kaiserwerth you found more of a centre with shops and wider selection of wining and dining. It is very pretty with cobblestone streets and baroque houses from 17th and 18th . I will write more about Kaiserswerth another time. 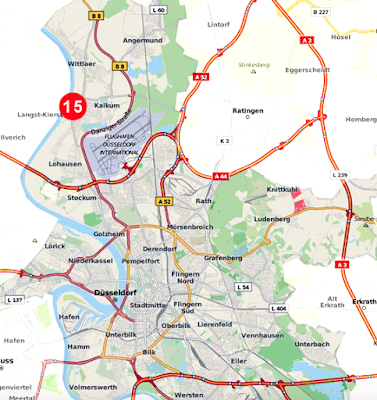 To go to city center of Düsseldorf from us is easy and only takes 20 min with U-bahn U79 to centre center and the station is only five minute walk from our house. To go with the car depends on the time of the day but in general it is a city which is not hard to drive in I think. Not billion lanes like in Moscow...

This is Mila 6 year old illustration I made for her birthday invitations this year or actually last year as she is born in December. We left for Christmas break in Sweden early December and mid November I realized that we should organize a birthday party here with her new friends in Germany. She has managed well in only four month that we have been living in Düsseldorf to find good friends to play with and feel more and more comfortable with. Other half Swedish kids living here that I have found from a Swedes in Düsseldorf page on Facebook and also a friends from Kita. 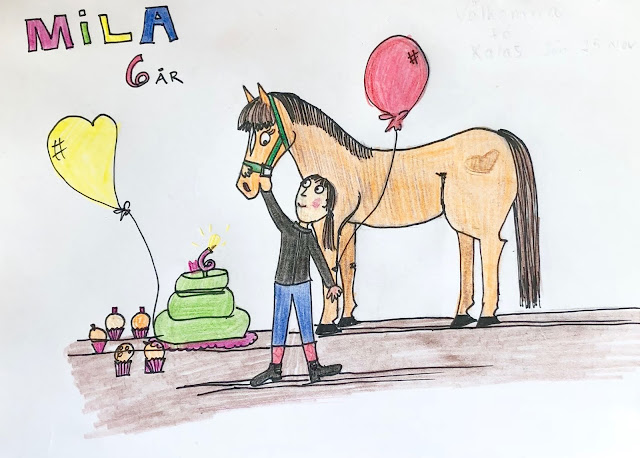 Also I have realized with all my movings that pretty soon you belong in the new environment more in away then the place and the environment you just left. Close friends will always or hopefully be there but the everyday social circle is in the new place and no longer in the old place.


She really wanted her party in one of those big indoor playgrounds. I know they are a lot of fun but no not this time. So I came up or actually no Loren came up with why they don't ride ponies instead as an activity. Great idea and I managed to rent three ponies from down the road and so after waffles, cake and play I loaded kids in the box bike and biked to the stable. It was rainy and muddy and pretty cold. We had Amy, Tessan and Arthur ( which they pronounce very weird here in Germany btw) and we had a great plan to let the kids take turn and ride the ponies home to our house. How cool. Great day and she was very happy and after that day our marathon of cold and flu started. Which made her miss her actual birthday with great plan of seeing Nutcracker in Stockholm as she had very high fever and nasty infection. This is the second birthday she is sick - the down-side of being born in the middle of the winter I guess. 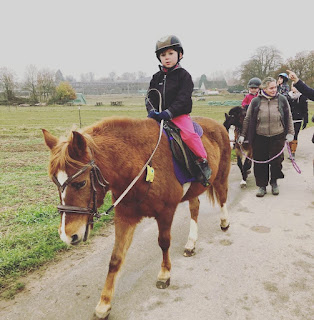 I thought I had more of her earlier birthday invitations but no can't find them in digital form but here is a couple of Happy birthday cards I started years back. 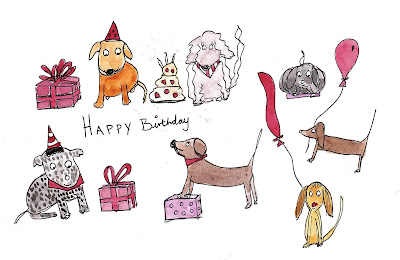 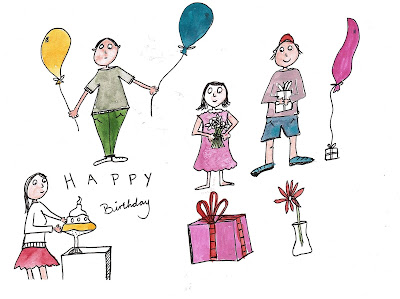 I always have one or two sketchbooks ongoing that I am drawing and writing in. Sometimes one in one format and one in an other format. But I can't have more then two books as I want to have a chronological order in my sketchbooks. These sketchbooks I am mainly using to draw memories from my life and Team Nikolovski´s adventures like I have always done and what this blog is based on. I also like the process of creating the illustrations and then write a short text here on the blog explaining the picture. Lately (a couple of years maybe more) I have not managed to update here that much. Why? Well that is a good question.
1. First of all I would say Instagram as it is a forum which is quicker to publish - but there I am only writing a shorter text to the pictures as my idea has always been to keep the stories here but then not got around to write more here as it feels like I have already used the picture...
2. An other thing is that I have been writing more and more in Swedish (out of this blog) and sometimes it feels weird to write in English ( not being my first language I feel I am making mistakes and also somehow and sometimes creating some linguistic limitations) but it also feels strange to all of a sudden move over to Swedish when I have always been writing in English here and the readers I have ( my husband for example) probably don't read Swedish very well. And maybe it is a way to get better to keep doing it, right!?
3. Who am I writing for? I have no idea why I am letting that slow down my writing but thinking to much about that.
4. When I have a back-log of ideas, illustrations and photos it gets messy when I am sitting down to write. Which post do I start with and I don't know where to start and so I don't start. Is it still interesting? My need of doing thing in chronological order making things hard. So much I want to write about for example about our move and our new life and area here in Düsseldorf and how German lifestyle differ from Swedish. 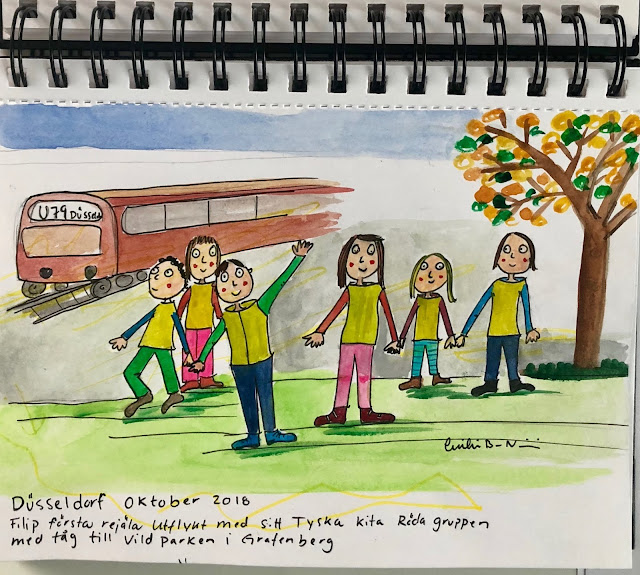 During autumn break here in Düsseldorf in October kids kita (daycare) organized many fun activities. As I was looking through Filip groups activities I nearly had a heart-attack. A day trip to Wild Park in Grafenberg was planned.... Fun but I feel he still is our small baby, or he was just a baby like yesterday. And now he is going with his German kita group with U-bahn through the city, change to another train and then walking pretty far uphill to the Wild Park. Having picnic with his friends and listening to his German teachers. He was so proud doing this trip and so happy and tired when he came back. I was happy but pretty nervous seeing him go and I have to admit I had left a little note in his jacket pocket with my phone number just in case he got lost... But I was also of course very very proud of him and amazed how much he has grown and that he is actually a little boy now and not a baby anymore. 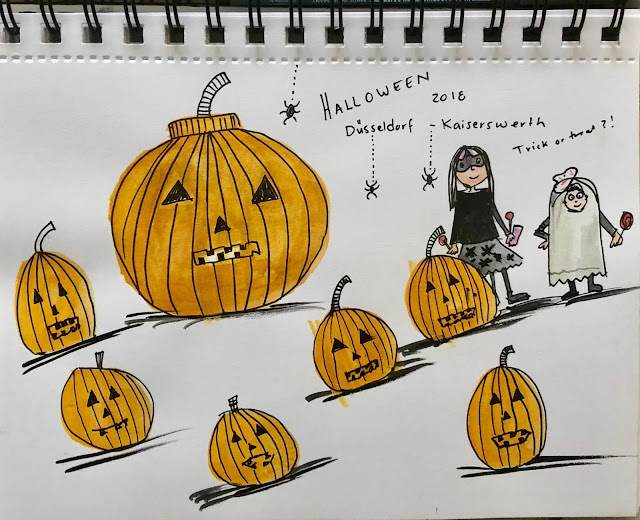 We managed a real full on Halloween experience here in Düsseldorf.  Mila had a creative idea how her costume would look like and I had another idea and so we fell out in that misunderstanding creativity.. After some screaming and a few tears we came to a peace agreement and managed to create a black dark spirit unicorn. Filip was more chilled and let me create a ghost outfit from a tablecloth and he had created a spooky mask I bought at IKEA. I had booked to met with a girl and her mother from kita in the neighborhood in Kaiserswerth where most American expats lives. Oh my God what a great experience. In this neighborhood the houses where decorated full on and its habitants ready for trick or treat. So many cool monsters, witches, super Mario, headless people and other weird characters. Outside one house they organized a party with drinks and bbq and sweets. I never though anyone related to me would be brave enough to knock any door ( as I would never be brave enough...) But I was wrong Filip love sweets and when he realized that he just had to knock on a door to get plenty he was not shy at all. And soon Mila followed behind her little brother and kindergarten friend. 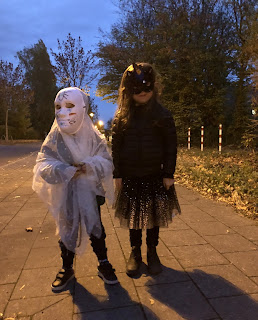 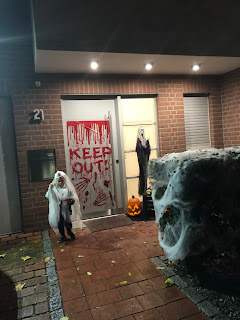 Talking about halloween we have a very cool farm shop close to where we live and from October their stands were full of bright orange pumpkins in different sizes. Cute little shop selling fruits and vegetables. 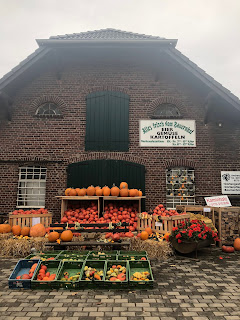 Happy new year 2019 !
Always exciting to welcome a new year and look forward to all what the new year has to offer, bring and what to make of the new year. Team Nikolovski are very happy to leave colds and ear-infections behind and to look forward and wish for health and happiness in the new year. We have just got back to Düsseldorf from a long christmas break in Sweden. This illustration is the family portrait I made for our christmas cards which I actually managed to send to some of our friends and family around the globe. 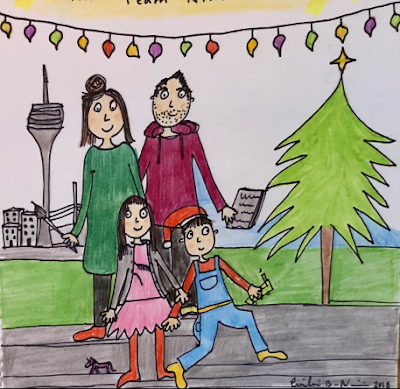