We have all heard of the concentrations camps Auschwitz and Dachau and the terrible crimes commited there. But did you know that during the Nazi Era around 730 so-called concentration camp subcamps were built. They were offshots from larger concentration camps such as Buchenwald and Sachsenhausen. Between 1942 and 1945 there were five such camps in Düsseldorf, which has long been forgotten.

Das projekt "Erinnerungszeichen KZ-Außenlager"  - "The memorial concentration camp subcamp"
The aim of this project is to remember and never forget what happened here in Düsseldorf not that long ago during the Nationalsozialismus.
Here was the five subcamps in Düsseldorf
-Das Außenlager Stoffeln - with up to 600 prisioners were used to clear debris after air-strikes.
-In Kalkum it was also an external command at the Kalkum bomb clearance command. Their task was to recover bombblinders after air-raids. Unlike other concentration camp subcamps here in Düsseldorf, the prisoners where not accommodated here on site, but brought to the area of operation by truck from Kirchfeldstraße camp in Friedrichstadt.
-Berta I and Berta II held a total of 1000 prisoners and they mainly worked at the Rheinmetall's secret armaments production.
-There was also a subcamp at the school of Kirchfeldstraße a camp of the SS company Deutsche Erd- Und Steinwerke with around 200 priosoners. 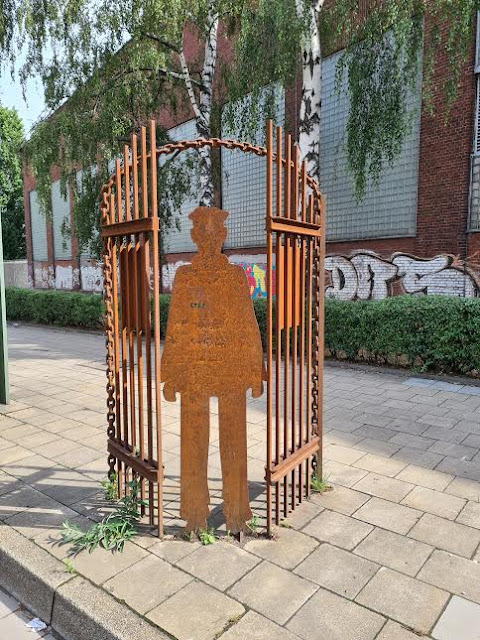 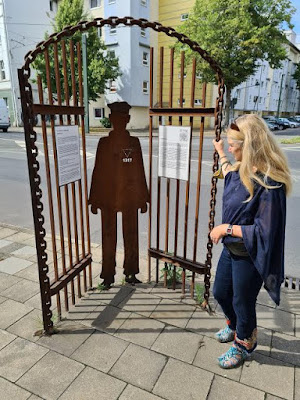 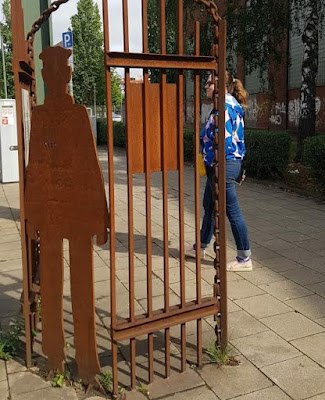 May 13, 2020
In my sketch-book I drew this illustration  In Sweden we have one big celebration 31 April - Valborgsmässoafton  It is a celebration for spring and the normal is to collect lots of people in parks and watch a big bonfire Also students meet up and drink and party a lot in normal times  But in this Corona Pandemic not so clever  So to prevent people to gathering  Lund a city down south of Sweden came up with the idea of spraying the parks with Chicken manure to prevent people from being able to meet up in the parks  How clever!  And I would have loved to hear the discussion amongst beige politicians when some genius cracked this idea
Post a Comment
Read more

November 09, 2020
In a small book-store in Kaiserswerth I saw some postcard with parts made of colorful pencil shavings and I thought it was a cute idea and I decided to try to make my own version of it. Also every week I am going through Mila school pen case helping to sharpening her pens if necessary ( her teacher keeps telling us parents to help with things like this) and the shavings are fluffy and colorful and it always hurts me a little to just throw it in the bin. Now I don't have to - I create different characters instead.  So here is my test round  The texts is inspired from one of Filip´s favorite book "Catch that plane" When the family is heading to the airport and the text is "as late as late can be" so I made my own version of it  What do you think?
Post a Comment
Read more